The Fear Mythos Wiki
Register
Don't have an account?
Sign In
Advertisement
in: Blogs, Completed Blogs, 2015 Blogs,
and 2 more

Between the Party Lines

Between the Party Lines is a blogpasta by DarkShadows about Richard Pinne, a Republican US Senator whose blog has been hacked by an unknown intruder, posting slander and lies about him. Intent on running for President in the 2016 election, he sets out to clear his name and put an end to these nasty rumors. This blog uses multiple images to tell its story, including fake newspaper articles and artwork by DarkShadows. It can be read here.

The story begins on February 25, 2015, when an unknown culprit hacks into Senator Pinne's blogger account and posts a message that says it is time for "The Hogs of War" to repent for their sins. Twelve days later a newspaper clipping from the Washington Reporter about Pinne's support for a proposal to drones strike ISIS training camps is uploaded to the blog. Pinne posts an update on March 12th where he informs everyone the hacker took his administrator privileges and wrote posts accusing him of embezzlement and voter fraud. To make matters worse, all of the blog's posts from January 2015 and earlier have all been deleted. He then warns all his followers that his passwords have likely been stolen, and tells them to look out for any suspicious-looking emails. Before leaving, he provides multiple links to government websites concerning scams, cyber security, and data protection online.

A few days later he announces the problems with the site have been resolved. Although he is unable to discuss any sensitive details, he does say the hacker is believed to be from the Middle East and is suspected of having ties to ISIS. He then talks about his recent nightmares of a large wolf-like creature with multiple red eyes. Pinne is not too concerned with this development however, as he has also dreamt of a tall, thin angel with enormous grey wings and a pale, porcelain-masked face that he believes was sent by God to calm him during his time of stress.

Pinne's next update comes on March 27, where he talks about how the corpses of squirrels and his family's at Boots have been left in his back yard, which he suspects to have been the handiwork of a rabid dog. He then moves on to a lunch conversation he had with his friend Oswald O. Lynch at Capitol Grille. He describes him as more tired and jumpy than usually, possibly due to anxiety over the drone strike proposal. When he asks what's wrong, Oswald informs him he has been kept awake at night by a barking dog and that it has been killing animals in his yard. On top of that, he has been experiencing similar dreams to Pinne involving a ferocious dog and an angel-like figure. Before divulging more information, Oswald changes the subject to his upcoming vacation. The rest of the evening was uneventful, but Senator Pinne continued to worry about the well being of his best friend.

After a quick Easter post reminding people of the Pinne Small Business Advancement Society's outdoor charity luncheon, another newspaper clipping is uploaded to the blog. The article reports that Pinne was attacked by a black labrador retriever puppy during the charity event, receiving a serious bite wound on his right hand. The party guests managed to calm the dog down, with one anonymous part-goer suggesting in an interview that the dog was probably just spooked because it wasn't used to people. Pinne's secretary uploaded an update on his condition a few days later, saying he had to undergo surgery due to a suspected flesh-eating bacteria infection. Fortunately, the infection didn't spread very far and Pinne successfully recovered after a few days in the hospital. A month later, Pinne returns to blogging with an update on his condition. He claims to be lucky to have underwent surgery when he did, as the doctors said he could have potentially lost his hand. He then announces he will not go back to work or update the blog until his hand has fully healed and thanks his supporters for all their prayers.

Another newspaper clipping is soon uploaded, this time reporting on the death of Senator Oswald after he went missing for three days. According to the police, his body was found inside his cabin near the Catskill Mountains clutching several papers and a hunting rifle. With no viable leads, his death was ruled a suicide triggered by the extreme stress and paranoia from his job. The next day Senator Pinne finally starts posting again. He admits that while he is unwilling to accept the media's claims that Oswald killed himself, he will still attend his friend's funeral. He also uses this opportunity to tell the public that the Washington Reporter lied when they said the dog that attacked him was a puppy. He says it was actually an adult and it somehow wandered into the country club the charity event was held at. He then proceeds to dispel the rumor that dogs were banned from the event because he hates animals, stating he did it because his daughter is terrified of large dogs. He first caught a glimpse of it when his youngest granddaughter pointed it out to him. Before he could respond, his granddaughter went over to pet the dog, not realizing it was feral. Pinne quickly ran over to save her and was bitten. At this point he begins to suspect the dog that attacked him was the same one that Oswald mentioned right before his untimely death.

Using his connections to the police department, Pinne gains access to the evidence in Oswald's death. During his time at the station he seea multiple photos of Oswald's cabin set on fire and was told that his body was never found. Because of this, the police believe Oswald was possibly murdered by one of his enemies. Andrew Kleson, the chief of police, shows him Oswald's diary, which filled with quotes from the Book of Revelations and a single tear stained page that says nothing but "Forgive me, I have sinned!". The police suspect the sin Oswald alluded to might be related to his death, and may in fact be the reason he was killed. Unfortunately, with no suspects or a motive, the case will likely be dropped. As he looked at the evidence by himself, Pinne noticed two wrinkled and bloodstained drawings. He took a closer look and saw that one of them depicted a black dog covered in several glowing red eyes callled The Watchdog. The other one featured a strange angel without a face dressed in black with the name "Azrael" written below. Frightened, Pinne wonders if Oswald's catholic teachings made him think an angel of death was after him, and whether he was the one who drew the pictures or if someone else did it as a threat or warning. Before he left, he stole both pictures and had his blog encryption-protected to prevent the police from learning he had stolen the evidence and brought it back to his estate.

Shortly afterwards Senator Pinne announces he will be taking a leave of absence, citing his declining mental health as the reason. He admits that he has been suffering from night terrors involving The Watchdog chasing him in a burning forest ever since Oswald's death. The dog repeatedly calls him a monster as it chases him throughout the dream until it finally corners him. It is this moment in the dream when Pinne finally realizes that there is a chain around the dog's neck preventing it from attacking him. He then looks up and sees Azrael is the one holding the chain. The nightmare always ends with the angel releasing the dog, allowing it to maul Pinne to death. Fearing that he has offended God, Pinne decides he will use this time to attend church more often and see a pastor for religious guidance. The blog becomes active again on June fourth with a post written by Azrael commanding Pinne to repent for his sins.

Still suffering from insomnia, Pinne describes a new nightmare in which he is alone in the forest, naked, bleeding, burnt, and in complete agony. Azrael then descends down to the ground, towering over him. The angel tells him that God is displeased with his actions as they have caused many deaths, and that he is marked for death. It then points to a scene of a warzone where dozens of men and women are being killed, a visual representation of all the suffering Pinne has indirectly caused through his policies on Middle Eastern affairs. Finally understanding the weight of his crimes, Pinne wakes up in a cold sweat. He becomes increasingly more paranoid as time goes on, convinced that the Watchdog and Azrael are both stalking him. However, he still refuses to end his support of the drone strike proposal, as he believes it is necessary to preserve christian morals and eliminate Islamic terrorism.

A week later Pinne describes how he went to church to pray for protection against the Watchdog. As he entered the chapel, he felt empty inside, as if his connection to God has been severed. After calling out the name of his pastor several times, he heard the voice of Azrael echo through the church and saw the angel sitting in a pulpit with the Watchdog standing at his side. The angel then asked Pinne if he was finally ready to repent, but when he answered yes it immediately accused him of blasphemy and declared he would never be forgiven. Out of fear, Pinne instinctively ran of of the church only to be relentlessly chased by the Watchdog. After locking the dog out of his house, Pinne decided to leave Washington DC to prevent his family from being harmed in the crossfire.

Pinne takes up residence at his family's cabin in the Appalachian Mountains range, where he remains hidden for over a week. His plan eventually falls apart when Azrael arrives and sets the surrounding forest on fire. Nearing death and with no other options, Pinne pleaded for his life one more time and was rejected again. Azrael maintained that Pinne still does not understand the nature of his crimes, just like Oswald before him. The angel admits to killing the former senator and casting his soul to hell so he may suffer for the rest of eternity. Before killing him, Azrael forced Pinne to write one more post on his blog describing his final encounter with the angel so his death would serve as as an example for all sinners. The last post was uploaded the next day on the Fourth of July and featured a final news article discussing the death of Senator Pinne's death. Although the paper states he died in his sleep during the forest fire, many of the local witnesses are not convinced by the story. Some bystanders of the event even claim to have seen an angelic figure flying above the trees and an unidentified animal hiding near the burning cabin before it was frightened away. 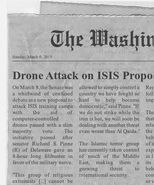