The Fear Mythos Wiki
Register
Don't have an account?
Sign In
Advertisement
in: Blogs, 2011 Blogs, 2012 Blogs,
and 6 more

Brighter than a spoon

brighter than a spoon was a blog by alliterator and marked the first appearance by The Cold Boy. It can be read here.

In 2012 alliterator rewrote brighter than a spoon for the National Novel Writing Month contest. The new version can be found here here.

Tav Lowe starts the blog to post his poetry, but he starts posting strange things people say to him. Soon, he posts a strange post which foreshadows a box appearing on his doorstep. The box belongs to The Slender Man and Tav must return it to him. Unfortunately, Tav's apartment is burglarized (though they do not find the box) and he comes under the supervision of SMSC Agents Liza Jane and Aladdin Sane. When the burglar (a former Proxy named Phillip Jeffries) returns and forces Tav at gunpoint to show him the box. Tav does, but then starts unconsciously shouting "His eyes are closed, his mouth is open, and his arms are outstretched." They appear to be transported to where the Slender Man is and the Slender Man kills Jeffries. Then Tav is returned shaken.

A week later Tav reappears, though his memory seems to be fading. He tries to quickly write what happened: he found himself in a mental hospital where the doctor tried to convince him the whole thing was a fantasy he had made up. When Tav wasn't convinced, however, the Slender Man appeared and took him away to another world - a world where the Fears had taken over and were at war. Tav meets an alternate Aladdin Sane and his own alternate self, who is a Proxy. His own alternate self shows what happens when the Fears fight outright - the stars go out and "the quiet claims us all." The Slender Man returns Tav to his own world afterwards.

Tav doesn't know if his memories of the other world are real or fake, made up by the Slender Man to force him to become a Proxy. He decides he will go on the run with Agnes, but they will no longer be running away from the Slender Man. They will, instead, run towards the future, waiting for tomorrow. 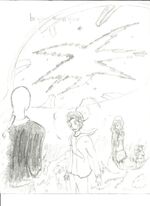