City of Sinopia is a blog by RedRockingHood, featuring multiple Fears but primarily exploring the story behind a Fear known as 'The Red Cap'. It can be read here.

It is accompanied by a tumblr (found here) that features the rhymes and pictures found in the blog; the characters also respond to questions. 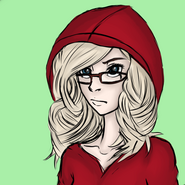 Red, as drawn by Cadet
Add a photo to this gallery
Retrieved from "https://thefearmythos.fandom.com/wiki/City_of_Sinopia?oldid=53936"
Community content is available under CC-BY-SA unless otherwise noted.