David Kallaway is the main protagonist of Blood On My Hands and The Bird and The Worm. He is the son of Carlton Kallaway and Shiella Malkator, and the cousin of Benjamin Malkator. He is a descendant and Scion of The Vision, as well as a partial servant of The Brute. He is also a former proxy of The Slender Man and was forced to become an Emissary until The Game Master was killed.

Kallaway is 21 years old, has dark hair, and an athletic physique.

Kallway's father, Carlton "Phantasm" Kallaway, was an Emissary who was unaware that his wife was a descendant of the Vision. However, he quickly put two and two together when he was sent to eliminate a Scion who turned out to be David Malkator, Shiella's brother and the father of Benjamin Malkator. Carlton became enraged, got drunk and got in a fight with her. He ended up pushing her over and she broke her neck against a wooden elephant sculpture she kept on the coffee table. David witnessed the event and saw Slender Man, who encouraged him to punish his father. He killed his dad by bashing his head repeatedly with the wooden elephant.

He was later admitted into an orphanage with an abusive owner. When he was a pre-teen, the Slender Man reappeared, telling him to kill her, which he did. He was then sent to Juvenile hall, where he met and befriended Derek "Quan" Quanford. They managed to escape with the help of Slender Man and became his proxies. He served his new master as a death dealer, killing people he felt deserved it. At one point, he allied himself with private investigator Malachai Dewitt to hunt down a rogue Proxy named Malcolm McDonald. For a while, he dated another proxy, but she was killed by a nest named Andrew Miles. Outraged, Kallaway allowed himself to become an Enhanced in order to avenge her death. However, he was unable to, and is still sworn enemies with Andrew.

Kallaway was then pulled into one of the Game Master's tournament, where he allied himself with Dewitt once again, along with Emily Kim and Axiom. During the tournament, he decided he would stop serving Slender Man and become a free man. Kallaway befriended Saylo Xdranyl, who was killed by Gordon Tayler. Kallaway used Saylo's Vision card, along with a Slender Proxy deck given to him by Jack of All to defeat and kill Gordon. He then burnt the Brute and Vision cards, but both fragments of the Fears embedded in them entered his body. Kallaway made it to the semi finals, where he forfeited his match against Blair. He attempted to strike down the Game Master, but his heart exploded due to his Enhancement and he died. He was brought back to life shortly afterwards and was forced to become a reluctant Emissary until the Game Master was killed by Isaac O'Zalia.

He then turned on Phantasm, who revealed that he was his resurrected father during their fight. Kallaway defeated him once again and Phantasm was devoured by The Empty City. He went off on his own for a while, and became friends with Daniel Ferris. He eventually came to blows with a revived Gordon, and he was able to defeat and kill him again. He ended his blog when he learned about his heritage and his destiny to kill Jack of All.

Kallaway was given an Emissary power known as Advanced Instinct, which allows his instincts to pull him through tight spots.

As an Enhanced, Kallaway has amplified strength and agility. He prefers unarmed combat, but will use weapons when he has to. He carries a massive red sword, which he mainly uses for finishing moves.

He possesses all the powers of a Scion, giving him enhanced vision which he rarely uses. He is also able to see the flow of other people or being's energy. He can also use the Brute's power to increase his strength further, and can enter a berserk state. By combining the Vision and Brute's powers, he can enter an armored form, in which his strength and senses are greatly improved. He can also fly, and his sword becomes stronger.

He later gains a Descendant form, where he grows a pair of red, chitinous wings, and a gauntlet appears over his right hand. He becomes capable of manipulating his sword from a distance, and his senses become even stronger than his armored form. 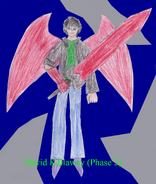 Artist: Acelegin
Add a photo to this gallery
Retrieved from "https://thefearmythos.fandom.com/wiki/David_Kallaway?oldid=69977"
Community content is available under CC-BY-SA unless otherwise noted.