The Fear Mythos Wiki
Register
Don't have an account?
Sign In
Advertisement
in: Characters, OH GOD THE RAPTURE IS BURNING

Donnivan "Donnie" Rand is one of the six main protagonists of OH GOD THE RAPTURE IS BURNING.

She is seventeen and British, and she is a frequent subject for the Fears' hate. Donnie starts the story out wanting to visit her significant other in Nebraska, US, but as the story progresses, she grows much less certain of her goals, as well as of her fate. Donnie grows attached to Bones as the apocalypse rages on, only to ultimately be killed in Xanadian Cornwall by the Masked Massacrer-- taking the form of Jordan himself. She dies searching for peace of mind.

Among the Fears, she is referred to as "Victoria." Her weapons of choice are a frying pan and a steel baseball bat.

Concept art of Donnie, drawn by Cadet on iScribble

Anna and Donnie, drawn by Cadet in iScribble 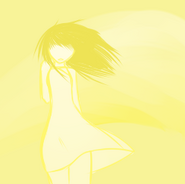 As drawn by Logic 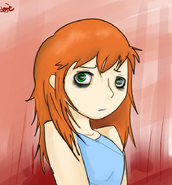 From Act I, as drawn by Logic