The Fear Mythos Wiki
Register
Don't have an account?
Sign In
Advertisement
in: Domains, The Empty City

Drawing Doors on flat surfaces may prevent them from appearing. In To Light a Candle, a patient at Shady Lawn would constantly draw Doors on the walls with chalk until he was stopped, at which point an actual Door appeared. It is not known if the drawings were actually preventing the Door from appearing or it just chose that time to appear.

The Rapture Cycle's version of the Doors are called rabbit holes leading to Xanadu. They go way beyond Doors, however, sometimes engulfing entire cities and countries. 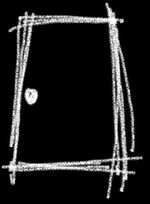 A drawing of a Door from Channel Fear.
Community content is available under CC-BY-SA unless otherwise noted.
Advertisement