The Fear Mythos Wiki
Register
Don't have an account?
Sign In
Advertisement
in: The Fears, EAT, Topography Genera

““There is no need to struggle. Your worries will end, and you will see things my way. I have no worries, did you know that? And neither will you, but there will be no ‘You.’ There will only be me. I am the only being you will know, I am the only being to be known. Everything in the universe, everything in every universe has a little bit of me. I am constantly growing, constantly evolving, constantly progressing. I will always grow, I will always flourish, and the only way to stop me would be to stop evolution, itself, for as long as life evolves, life will always eat.””
— Testing in Progress

EAT is the first portrayal of the Fear of Depersonalization. It is a hive mind of water that represents depersonalization through multiple different venues, with the most common ones being obsession, singularity, and deliberate complexity. It comes from Jordan Eats Normally Now and the Topography Genera canon. EAT's motives are never made clear; as Topography Genera continues, Camper Ian Manning claims EAT feels an insatiable hunger that it desperately wants to find some way to suppress.

The letters of EAT's name are treated as an acronym whose true meaning is left a mystery. In Jordan Eats, they're said to stand for "Epping AquaTarkus," while in Topography Genera they stand for the "Evolutionary Adverse Trigger," but in general whether these are true or not is unknown. Another interesting thing to note is that, when using pronouns for EAT, character always refer to EAT as "it" and "her," but never "she."

EAT works by 'eating' a body of water (e.g. a lake, a human) and replacing the water with itself. A human filled with EAT will become a victim of it, ambiguously referred to as The Camper (plural: Camper). An unsuspecting victim typically initiates transformation by coming in contact with a body of water contaminated by EAT's "ink". While the "ink" will filter itself out of the victim's body within ten days, they will continue to experience an urge to approach the aforementioned body of water, which presents an opportunity to permanently transform them into a Camper. The process, for earlier victims at the very least, is afterwards divided into several stages: 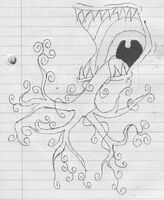 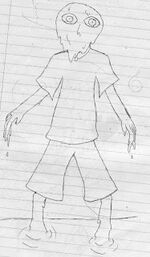 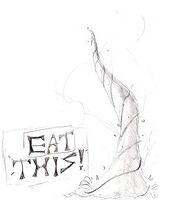 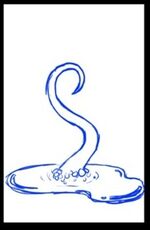