Grey is the main Dying Man shard featured in the Dying Man Verse. He is purposefully set up as a run of the mill shard that, over the course of the storyline, grows into quite a dangerous creature. He is named Grey because of the themes he represents, and to also mock Owen, as Grey is Owen’s middle name.

Grey was initially a regular shard that desired a quick host, but he unusually began to develop a fixation on his first host, Owen Norris. He tries to “help” him out of his abusive environment because of this, and starts to form a connection to Owen’s personality that warps him into adopting a few human personality quirks. The contrast between these quirks and his natural state as a Fear serve as a thematic conflict for the blogs he’s featured in.

Grey's abilities include possession of living beings, objects, and locations, and also slight reality warping (such as jumps in time and pocket dimensions). 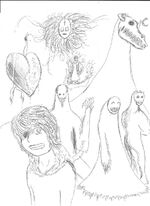 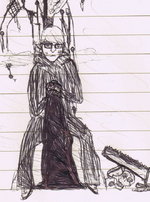 Artist: The Visitor
Add a photo to this gallery
Retrieved from "https://thefearmythos.fandom.com/wiki/Grey?oldid=71299"
Community content is available under CC-BY-SA unless otherwise noted.