The Fear Mythos Wiki
Register
Don't have an account?
Sign In
Advertisement
in: Servants, Maenads, The Rake

Maenads is the name for those who go insane and kill others and/or themselves due to influence by The Rake. The name was coined by the Free Radical after the Maenads, mythical followers of Dionysus, whose name meant "raving ones."

Like the Rake, Maenads embody brutality, animosity, cruelty, and cunning; they are capable hunters and killers, and most do not have a capacity for remorse. Some appear to be ordinary people who were driven to madness by the Rake, while others are deranged serial killers who mutilate themselves in order to imitate their master. Most Maenads have bloodshot eyes and do not seem to require sleep to function; all of them are mentally unstable to varying degrees. Not all Maenads appear to be insane however; both Spike and Scarneck from Hidden in the Trees did the bidding of the Rake, though they may have been unaware of it.

In Telling Truths, Maenads are animalistic shapeshifters capable of altering themselves into more bestial forms. 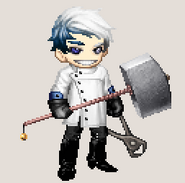 Created through TekTek by The JOKER
Community content is available under CC-BY-SA unless otherwise noted.
Advertisement