The Fear Mythos Wiki
Register
Don't have an account?
Sign In
Advertisement
in: Novels, OH GOD THE RAPTURE IS BURNING, 2011 Blogs, Redrafted Blogs

OH GOD THE RAPTURE IS BURNING

OH GOD THE RAPTURE IS BURNING is a novel by DJay32, and the first work in the Rapture Cycle. Its final draft is split into two volumes (labelled "Discs"): The Cockroach Metamorphosis (released August 2016) and put the sun down (coming later). It is the longest work in the Fear Mythos so far.

Its plot involves the unabridged journals of sixteen-year-old Jordan Dooling, a deconstructed self-insert who survives pathetically through a 2011 apocalypse feared even by the fluctuating pantheon of Fears who roam the planet. This apocalypse involves doors opening to a universe of utter nonsense, and the arbitrary laws of that universe infecting life on Earth. Periodically throughout the journals, other characters attach notes which are then organized by "eternity's historian" Tiresias, who also manages the upkeep and notation of the overall logs. He leaves many notes of his own, ruminating on his long life of time travel and learning the ways of being a Fear.

Drawn by Wiratomkinder to celebrate volume 1's release. The Harlequin closes a door.

Drawn by TheArtist, for the first volume's release. Jordan's trilby and guitar controller.

Drawn by Logic for the first volume. "In the Lair of the God Machine." 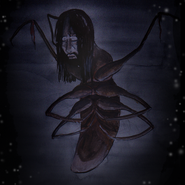 Painted by Rappu. The Fears gather for a thing.
Community content is available under CC-BY-SA unless otherwise noted.
Advertisement