The Fear Mythos Wiki
Register
Don't have an account?
Sign In
Advertisement
in: Servants, Proxies, The Slender Man

Proxies are the Slender Man's standard servants, and are commonly described wearing masks and hoodies in order to conceal their identities. In most stories, Proxies are the ones who perform certain physical tasks that the Slender Man cannot do himself because of his inhuman nature. This can include anything from influencing victims as needed, creating and/or manipulating objects, destroying and leaving evidence, and even creating videos and responding on Twitter.

Most Proxies are former victims of Slender Man whose mental stabilities have deteriorated considerably after several years of being stalked. This made their minds susceptible to mind control, allowing the Slender Man to influence their thoughts, feelings, and actions through telepathy. Alternatively, some Proxies decide to do his bidding of their own free in order to guarantee the safety of their loved ones or simply because they cannot handle the emotional strain anymore.

The servants of other Fears have also been called Proxies from time to time, but this is a misnomer, as the name only applies to Slender Man servants.

Later on, it was explained that there were different types of Proxies:

Many Proxies appear to have some kind of symbol of their own or share the marks of others. Some have an actual paranormal or physical use, while others are simply a symbol of Slender Man's repeating presence or a means of intimidation. Out of all the markings Proxies have used, The Operator Symbol is the most reoccurring. 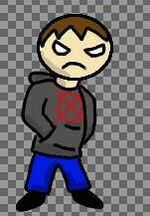 A Proxy in Fear Mythos: The RPG

A Proxy in Panopticon: The Fear Mythos RPG 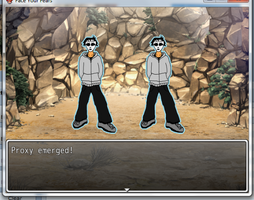 Proxies from the cancelled Face Your Fears game
Community content is available under CC-BY-SA unless otherwise noted.
Advertisement