Summer Sucks is a midi concept album by DJay32 and Lindsay Taylor, released on June 20, 2020 for free listening on YouTube and free download on Google Drive. On December 17 2020 it was added to Bandcamp as well. Purportedly the second release by fictional progressive rock band Sunsetters, this is a two-disc rock opera portraying a metaphysical apocalypse overseen by "the Clowns." The music, written in MuseScore over a five-year period, continues the first album's style by emulating the trappings of a conventional five-piece rock band, though certain songs feature emulations of additional instruments (such as brass horns, string orchestra, growling vocals).

The Supermarket Yggdrasil, a central album myth, drawn by Hexillith 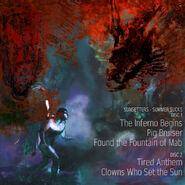 Back of the CD case outlining the disc structure.
Add a photo to this gallery
Retrieved from "https://thefearmythos.fandom.com/wiki/Summer_Sucks?oldid=76163"
Community content is available under CC-BY-SA unless otherwise noted.