The Ace of Chaos was an 800 year old sorcerer who is famous for having courted and impregnated The Vision. He is also the ancestral grandfather of Benjamin Malkator and David Kallaway. At the end of Daniel & Friends, he reveals that he is Daniel Ferris from an alternate timeline which is so different from the mainstream one that he was born under a much different name (Marshall Smith). He accidentally travelled to the distant past during an attempt to perform a defensive ritual, causing many of the events of The Daniel-Verse. He died after saving Malkator from Silvermist by destroying his own body in an attempt to kill Silvermist along with him. As a proficient Mana user, the Ace of Chaos' soul was unable to be claimed by The Archangel.

In another timeline, the Ace of Chaos (called Marshall Smith at the time) was a victim of The Vision. After avoiding the deaths she showed him thrice, he attempted to use her power to perform a defensive ritual he found in a magic book. However, he got the spells mixed up, resulting in him being sent back in time and creating a new timeline. This timeline would branch out even further, resulting in the creation of countless parallel universes.

Approximately 800 years ago, he reappeared in the main Daniel-Verse timeline, and became a runner from the Vision once more. Every time she showed him his death, he was able to narrowly avoid it. The Vision became impressed by his stubbornness, and offered to make him a Scion but he refused. When asked what he wanted instead, he kissed her. The two of them fell in love with one another and had two children. After hearing about their relationship, The Game Master, who was also in love with the Vision, was enraged. He struck her down and sent the Ace of Spades to kill Marshall, which lead to a battle where The Ace of Spades cut out his right eye.

The Ace of Chaos became vengeful after the Vision's death and with the help of the Scion Dyson Malrick, he acquired the power of Mana and became a sorcerer. He trained with magic for years, and was eventually able to combine dark and light magic into Chaos Magic, a feat no other Mana user had ever accomplished before. He continued to resist the Game Master, eventually killing the Ace of Spades and claiming his mask for himself. He also fought against a Hallowed, and using his Chaos Magic, he was able to cure him of Hallowfication, but as a side effect, he partially Hallowfied himself. He eventually crossed paths with The Slender Man. After being insulted by Slender Man, the Ace of Chaos began production of the Godslayer, a weapon that could kill a Fear. He went to acquire more Mana for his goal, but absorbed too much, permanently damaging his remaining eye, causing it to glow. Jack of All tampered with the Godslayer while it was still in production, adding some of his own power. The Ace of Chaos eventually completed the Godslayer, but lost it shortly afterwards.

The Ace of Chaos was then taken by Isiore and Keursio (though it is unknown what happened next).

He was eventually captured and imprisoned by the Game Master, but broke free when he discovered he had a living descendant. He met with Malkator shortly afterwards, and sacrificed himself in an attempt to kill Silvermist. However, his soul couldn't be absorbed by the Archangel and he was able to linger on as a ghost.

His appearance was originally unknown; David Kallaway saw his face in his dreams, and Benjamin Malkator was shown his identity by The Burning Bride, but neither of them described him, and both said they were shocked to discover what he looked like. All that was known was that his right eye is missing and his left eye glows. He wears a mask he obtained by killing the former Ace of Spades. His mask displays a Vision eye, bound in chains, with an intricate A overlapping it.

The Ace of Chaos possessed a vast amount of powers: 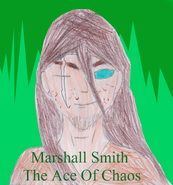 The Ace without his mask, drawn by Acelegin

Cardboard Replica of the Ace of Chaos's mask
Add a photo to this gallery
Retrieved from "https://thefearmythos.fandom.com/wiki/The_Ace_of_Chaos?oldid=70889"
Community content is available under CC-BY-SA unless otherwise noted.