The Fear Mythos Wiki
Register
Don't have an account?
Sign In
Advertisement
in: The Fears, The Merryman

The Merryman is a portrayal of the Fear of the Irrational, impulse, the extreme and the pursuit of joy. He manifests as a pale white, tall figure wearing tattered, brightly colored cloth. He has large animal-like claws and a head comprised of nothing but a wide, red-lipped grin stretching from one end to the other. He often appears with extreme damage to his body such as massive chest wounds, suture marks, broken limbs or internal organs falling out of his body and onto the ground. These injuries rarely hinder his ability to catch humans in the slightest however, as he feels no pain and cannot be killed.

The Merryman typically causes those who see him to express physical signs of extreme and often outrageous joy no matter what their current mental state actually is. Victims often find themselves experiencing fits of maniacal laughter followed by sudden bouts of depression as he drains their ability to feel happiness the longer a person is exposed to him. Exposure to the Merryman's laughter itself can cause hallucinations, bouts of extreme mania, and the sense that reality is unreal. Once he selects a victim, The Merryman will stalk them for a short period of time before making his presence known. After this occurs, it won’t be long before he takes them to his Toybox.

He chooses to not keep servants, instead preferring to hunt and capture the people he wants for The Toybox himself. 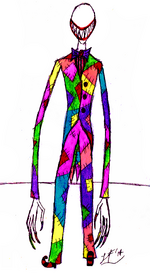 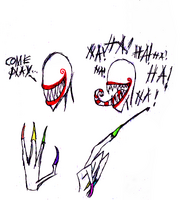 Details of The Merryman by DarkShadows 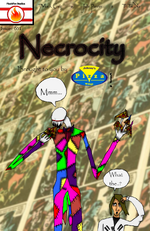 The Merryman on the front cover of Necrocity 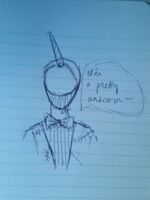