The Panopticon is an organization dedicated to eradicating The Fears. It was originally born from a US government think-tank, but has since broken off from Washington and became its own entity. The group operates under the belief that Fears are "meme complexes" created through widespread belief in them. More extreme corners of the organization believe that the Fears are not real, but rather the product of mass hallucination. While they were originally founded to combat Slender Man, they have since expanded to combat belief in other Fears as well.

Panopticon agents operate by abducting those who have encountered Fears and forcing them to undergo mental conditioning. Abductees are placed under heavy hypnosis and intense psycho-therapy designed to convince them that the Fears are not real, and are merely the products of their own minds. In areas with heavy Fear activity, agents will place propaganda posters, reassuring victims that they are safe, often using slogans such as "This is the best of all possible worlds." 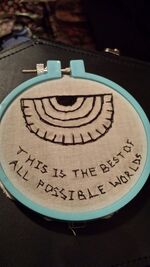 Embroidery created by hipsterprimeminister
Add a photo to this gallery
Retrieved from "https://thefearmythos.fandom.com/wiki/The_Panopticon?oldid=69719"
Community content is available under CC-BY-SA unless otherwise noted.