The Fear Mythos Wiki
Register
Don't have an account?
Sign In
Advertisement
in: The Fears, The Plague Doctor, Brighter than a spoon

The Plague Doctor is the first portrayal of the Fear of Disease. Very little is known about its motivations outside of spreading disease wherever it appears, although it seems to be sentient enough to target specific individuals. As its name suggests, this creature wears a beak-nosed mask (though some debate it may truly be its face) and a long black robe similar to the ones worn by physicians who treated the Black Death. According to The Archive, he did not always appear like this and probably adopted this form in response to the black plague of Europe. In some stories, his presence will instead manifest as a mental disorder or hypochondria.

It often enjoys going to festivities involving costumes such as carnivals, as it can spread diseases among the patrons without seeming unusual. It can sometimes be heard chuckling to himself, but rarely makes a sound other than this. An appearance of the Plague Doctor has also been known to cause plants to wither away as he walks past them.

His domain is the Crumbling Castle. 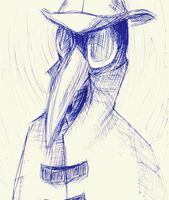 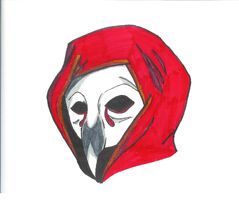 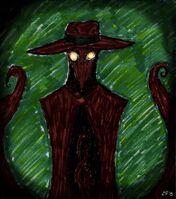