The Fear Mythos Wiki
Register
Don't have an account?
Sign In
Advertisement
in: Creatures, The Slender Man, Creepypasta,
and 3 more

The Slender Man is an enigmatic supernatural entity with nebulously defined motives. It appears as a thin, unnaturally tall humanoid creature in a dark business suit with a blank, featureless face. It is also capable of sprouting black, wispy tentacles, which it uses for capturing or intimidating prey. In the original stories, it had a different face to anyone who saw it and it was only faceless when photographed or caught on tape.

The Slender Man's most common targets are children or adults who saw it as a child. It generally behaves in a very passive aggressive manner, preferring to mentally torture its victims by stalking them from afar as they slowly delve into madness. Once a victim is reduced to irreversible psychosis, it will either abduct them to parts unknown or deliver the killing blow. An encounter with the Slender Man often triggers paranoia, nightmares, delusions, nausea, nosebleeds and insomnia.

The Slender Man's most common servants are called Proxies and vary in rank, such as "Hallowed" or "Agents."

The Slender Man's domain is The Path of Black Leaves. 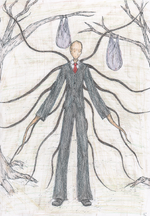 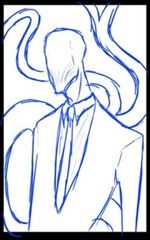 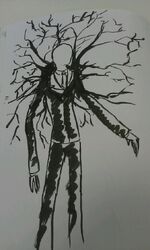 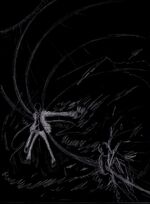