“He smiled at me and his smile was wider than his face, and he had so many teeth, so many goddamn teeth. And then he showed me the bouquet. Black roses, yellow tulips, yellow carnations, white heliotrope, lavender hydrangea.”
— The Jeanette Experience

A portrayal of the Fear of the Unknown, The Smiling Man is a dangerous humanoid with malicious intentions. In most stories, the Smiling Man has straggly red hair and a smile wider than its face. Although it has eyes, they are so "wrong" that victims cannot look at them without being repulsed. Photographs or videos will only show black spots where the eyes should be. It is also commonly portrayed wearing a suit or a torn straitjacket.

It is often seen walking or "dance-walking" down nearly empty streets. It has been known to follow victims in a dancelike run, pursuing them for miles. It will attempt to break into any shelter its victims hide themselves in. Before it takes its victims, the Smiling Man will deliver a bouquet of flowers to them arranged in the language of flowers, presenting coded messages. Its most common targets are young women, but that does not mean it will not go after humans of different ages and genders.

In The Jeanette Experience and its related blogs, it has a fondness for burning, gouging out, and otherwise damaging people's eyes. It is also indicated in the same blog series that it is unkillable, as demonstrated by its perpetual appearance in spite of being repeatedly shot apart by Jeanette. Proxiehunter speculated that this apparent immortality may be a result of the Smiling Man being a plant based creature that can recreate its body through flora and vegetation. This is further supported in Mephi, where the Smiling Man has the ability to create petals from thin air that create cuts and gashes when they touch skin.

Its servants are called Rose Brides and Violet Grooms.

The Smiling Man's domain is The Flower Fields. 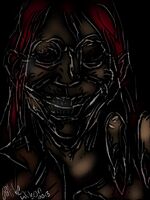 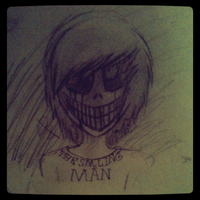 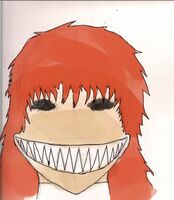 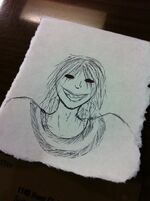 Artist: RedRockingHood
Add a photo to this gallery
Retrieved from "https://thefearmythos.fandom.com/wiki/The_Smiling_Man?oldid=74140"
Community content is available under CC-BY-SA unless otherwise noted.