The Timberwolves are a cult, often with gang like aspects, that worships The Archangel.

Originally very small, they quickly gained numerous members due to the Archangel's influence, and rapidly spread throughout the United States. Their relationship with other the Fears and their servants vary greatly, depending on the beliefs of the faction members are a part of, ranging from outright hostile to apathetic at best.

Members will often have the Twin Triangles tattooed on their body, or placed on a piece of green or yellow clothing. It is assumed that both colours are the offical 'colours' of the Timberwolves. 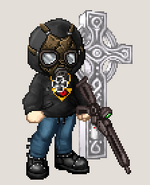 A Timberwolf impersonating The Archangel. Created through TekTek by The JOKER 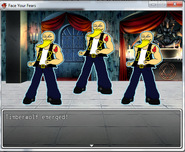 Timberwolves from the cancelled Face Your Fears game
Community content is available under CC-BY-SA unless otherwise noted.
Advertisement