The Fear Mythos Wiki
Register
Don't have an account?
Sign In
Advertisement
in: Verses, Topography Genera Center East, The Supernatural Anaesthetist,
and 2 more

Topography Genera was a multimedia plentiblog story co-created by DJay32 and alliterator revolving around the rise and progression of EAT, the actions of the "Fossil-research" organization known as the Topography Genera Center, and the fall of Runner culture. It was considered the sequel to Jordan Eats Normally Now and "parallel" to DJay's other major work OH GOD THE RAPTURE IS BURNING.

The story spanned twelve primary blogs, numerous supplementary blogs, and some short stories. It has received a major rewrite and is now a physical book.

Topography Genera was organized in such a fashion that the only reading order is The Supernatural Anaesthetist and Topography Genera Center East, which refer to each other only superficially and can be read individually. The remainder of blogs are linked to in the points of the two narratives where it is necessary to read them.

In Topography Genera, the Fears are referred to as "Fossils" and are given designations of "FOSSIL TYPE-X," or "FT-X" for short. 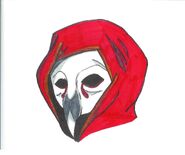 Red Death, as drawn by Madinrei

Hades, as drawn by Cadet

Selkie, as drawn by The Visitor

The Cremator, as drawn by DJay

Favicon for the blogs of this verse.
Community content is available under CC-BY-SA unless otherwise noted.
Advertisement