This is just a page that contains some lore about my own verse, mainly concerning locations, races, technologies, and expansion on the origin of the fears, among other things. Yes, this will result in some of my earlier stories being somewhat retconned, specifically the 'Stories' series. They were crap anyway. And I was fourteen or fifteen when I wrote them.

This is the main sphere of existence the Collectorverse takes place in, apart from Domum Mundi.

Countries and Provinces of Lucem

Ultima Thule is home to the main population of Man, both Plainsmen and Sandstriders. However, there are plenty of Fey who live here too, such as the Shade and Briar Elves in the great Mournweald Forest, the Goblins and Hobs of Vaardil Swamp, and the Duergar of the volcanic Mount Duervon.

The ancestral home of the Fair Folk, both Highborn and Lowborn. The continent is split into two parts: Western Avalon, the lush and verdant home of the Highborn, and Eastern Avalon, the harsh and hardy crucible that forged the Lowborn. Directly betwixt these differing landscapes is the Moonlight Forest, where the Ancestral Fey were born.

The Moonscar Isles is a jungle-covered, misty archipelago, located between Ultima Thule and Avalon, named for it's most prominent island, Luna, which is shaped like a crescent moon. It is the home of the rougish Alnamiri, and the herculean Rocians, and is the above-sea headquarters of the Moonscar confederation.

Also known as the Slip, this place can be described as a dark shadow of Lucem and Mundi, home of the truly lost and hopelessly irrational. Most that come here wither away, becoming either morally ambiguous shadows or screeching banshees.

Earth, and the universe surrounding it. For better or worse, our home.

'By the agreement of this armistace, we, The High Kings of Lucem, declare the freedom of all intelligent and wise races, and that no male or female is held in slavery, or unlawfully persecuted or imprisoned. All races are to be recognised as people by their fellows, and by their religious leaders, and before the law. All are entitled to property, education, religious freedom, and opinions. No one has the right to kill, torture, or enslave their fellows.'

Mankind, on Lucem, that is, are technically an invasive species; they originated from Mundi, more commonly known as Earth, and found Lucem merely by chance. However, they have only colonised one continent. 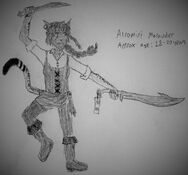 Originating from the Moonlight Forest on Avalon, the Fair Folk, or Faeries (from the fair tongue Fey Rie, meaning Fair People) are amongst one of the most varied of the races.

When the ancient fey left Moonlight Forest, some found themselves in the pastures of Alvos, and became the Highborn. These Highborn eventually evolved into the Elves, Pixies, and Ogres.

Some of the ancient fey, instead of finding green meadows and peaceful woodland, found freezing steppe, tall mountains, and cruel desert. However, instead of turning tail and returning to the forest, they endured the harsh environs.

While the first two groups reside on land, the Pelagica prefer to live in the oceans, though they also live in lakes, swamps, and slow-moving rivers. The main Pelagic settlement is a city in the Dagonic ocean. Also known colloqually as 'Deep Ones', but this term is usually reserved for the Y'hani.

The Pelagic Ones' language is known as Brackish, though R'lyehian is a common laguage among Cthulhi and Juhl-Hai priests, due to them being the most powerful of the Pelagic clergy, and almost all Pelagics speak perfect English.

Decsended from the slave caste of the now-extinct Brenovians, the Avians bear an uncanny resemblance to birds, right down to the beak. While they are not nearly as common as the other races, they have a much wider spread, existing on all known continents of Lucem.

Not actually a distinct free race, but rather a series of individuals afflicted with transformational, semi-permanent diseases.

The Fears, the wardens of the first three spheres, protectors of the Free Races and the enforcers of Fear itself. They all have their purpose... and their origins.

Fear of the Unknowable

Abbadon the Occultist, also known as Abbadon the Sinister, and once known for a very brief stint as the Slender Man, is the court magician for the Stonefire royal family, mostly performing simple parlour tricks for entertainment, but may use more powerful spells if required. He was one of the angels who fell to earth and made into a Fear. He is very protective of his sister, Artemis, and dislikes it when she gets too chummy with Vidalia.

Fear of Passing On

Though he calls himself a fallen archangel, the being known as Hades is actually a primordial and powerful Deity, specifically of death, and much older and more powerful than the current Gods, let alone his angelic bretheren.  While most souls make it to the afterlife without much help, Hades steps in when they're having trouble letting go, or when they lose their way. He has no great love of necromancy, but understands that it, as with most magic, has it's uses.

Despite her name, Thaumiel only sees glimpses of the future, as to know all would be torture (even for a fallen angel), but these glimpses tend to differ in accuracy, from vague and malleable, to certain and absolute. The current outlook is bleak, but is thankfully subject to change.

Supplimentary lore stuff, or Skylord is a lazy dick who can't write proper stories, so he settles for random tidbits that'll probably be touched on later